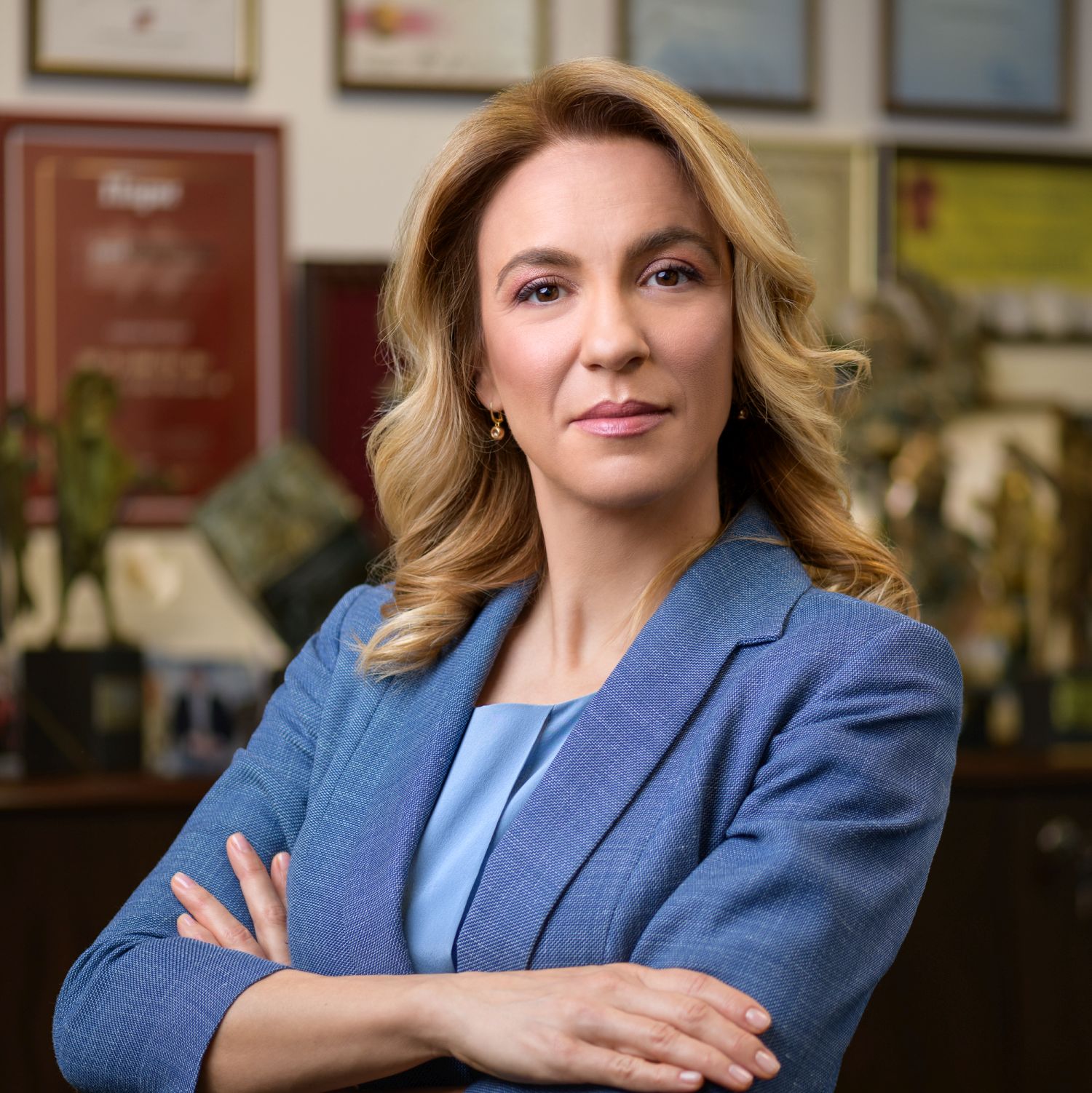 Under her leadership, Postbank completed in just a few years two successful deals, the acquisition and integration in a record short-term time of Alfa Bank – Bulgaria Branch, followed by Piraeus Bank Bulgaria. They are another step to strengthen its position as a systemic for the bank market and to expand its customer base.

Mrs. Dimitrova began her career in 1996 at the Consular Department of the US Embassy. Then, in 1998-2003, she worked at PricewaterhouseCoopers as Senior Manager and Senior Auditor.

She is a chartered accountant, qualified ACCA member of the Association of Chartered Certified Accountants (ACCA) in London, UK. Mrs. Dimitrova has an Executive MBA in General Management from the University of Sheffield, UK and holds two Master Degrees in Finance and Banking and Tourism from the University of National and World Economy and Sofia University St. Kliment Ohridski. In addition, she is a graduate of ALBA Leadership Development Program, Harvard; holds a Certificate of Merit from Georgetown University Leadership Seminar, Washington D.C. and graduated Management and Social Development of NGOs at the Aristotle University of Thessaloniki and University of Macedonia, Greece. She also holds certificates for successful completion of the program “Harvard Business School – YPO Presidents’ Program” in 2018, 2019 and 2020.

Mrs. Dimitrova has acquired her professional qualifications in UK, Greece, Holland, Belgium, USA and Bulgaria, and has participated in various prestigious international trainings, seminars and conferences.

Mrs. Dimitrova is a Member of the Management Boards of the Association of Banks in Bulgaria, “Atanas Bourov” Foundation, “Borica” AD, Endeavor Bulgaria Association, the International Banking Institute. She also is a Deputy Chairman of the Board of Directors of Hellenic Business Council in Bulgaria, Associate member of the Management Board of CEIBG and Member of the University Council of the American University in Bulgaria. Petia Dimitrova is a Member of the National Council of Global Compact Local Network Bulgaria, Industrial Advisory Board – CITY College, International Faculty of the University of Sheffield, Young Presidents’ Organization (YPO), Young Global Leaders Forum, part of the World Economic Forum, Gerson Lehrman Group Accounting Council London, UK, Fellow Member of the Chartered Management Institute, UK and Cofounder of the Public Council of Women in Business.

Mrs. Dimitrova has received many awards, including the prestigious recognition “Mrs. Economy” in “Mr. and Mrs. Economy” competition organized by CEIBG and Economy Magazine (2018, 2015); award by “Atanas Bourov” Foundation for Banking and Financial Management (2017); the Special “Banker of the Year” Awards by Banker weekly in 2020, 2019, 2017, 2015 and 2012; “Woman of the Year” in Business category by Grazia magazine (2014); two Silver Stevie Awards – “Female Executive of the Year in Europe, the Middle East and Africa” and “Female Executive of the Year – Consumer Services with up to 2,500 employees” (2013); “Banker of the Year 2012″ by Banker weekly; “Mrs. Economy 2012″ for her contribution to the development of the banking sector; one of the Young Global Leaders honorees for 2012, distinguished by the Forum of Young Global Leaders part of the World Economic Forum; International Faculty Distinguished Alumni Award from The University of Sheffield (2011); Businesswoman of the Year (2010); the Grand prize in the Bulgarian annual contest for young managers “Next generation” (2009) by Capital weekly; and many others.

Under her leadership Postbank won nearly 100 prestigious international and Bulgarian awards, including gold in “Excellence in Customer Centricity or Customer experience” category in one of Europe’s most prestigious competition in the banking sector – The Retail Banking: Europe 2019 Awards. Also “The Best Retail Banking in Bulgaria” award in 2018, 2019 and 2020, “Best Consumer Digital Banks, Bulgaria 2020” award and “Best Mobile Banking Apps, Bulgaria 2020” award from the London-based World Finance Magazine, “Bank of the Year” 2019 at the Annual Bank Awards, Best Employer Awards, and many more.

All sessions by Petia Dimitrova

Inflation, currency board and eurozone candidacy: the 2022 context